I ordered this model by Trains & Planes Ltd, UK, which keeps in store some models sold out on other on-line shops catalogues. 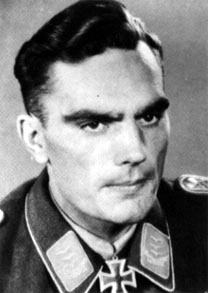 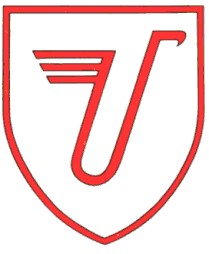 From the JG (JagdGeschwader) 3, the IV Gruppe consisted of the 10th, 11th and 12th Staffeln. 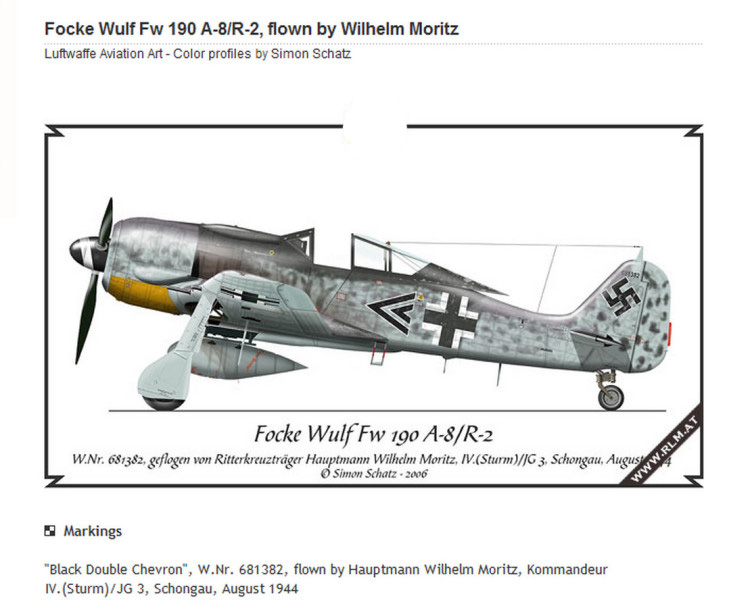 This real diecast model, limited to a 1000 items series, completes my 1/48 scale FW190s to 4 at this time (see lowest photograph on this article).

On the other hand, the fuselage mottled pattern, as usual, seems too large. Improvements will be welcome by Hobby Master.

Here are some pics of this awesome Sturmbock model: 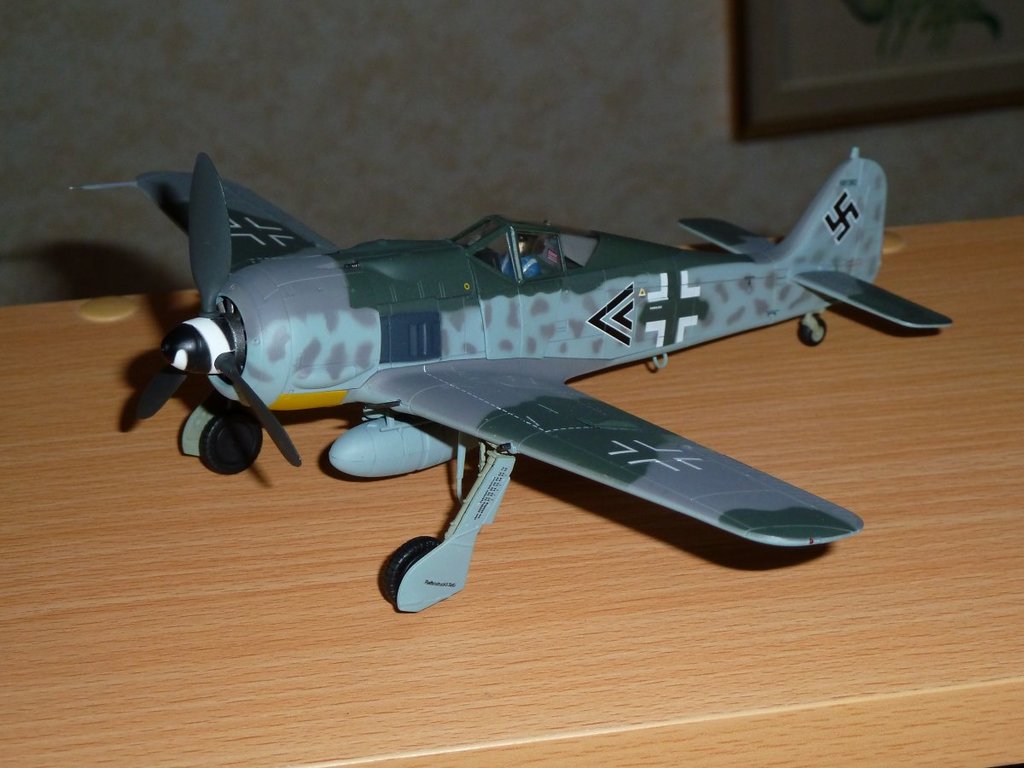 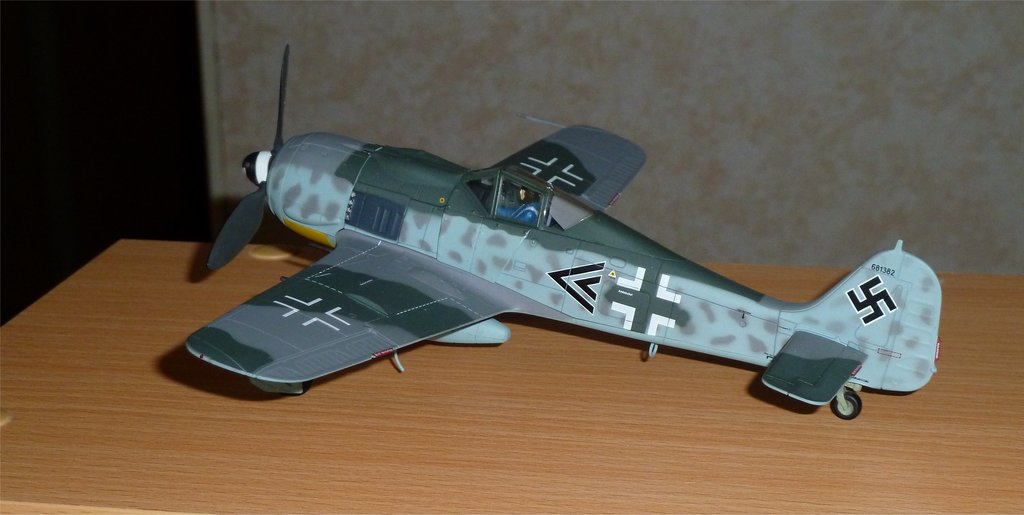 I think it's the moment for another historical discussion !!!

The SturmStaffeln (or "Storm" - Assault Wings) were created in late 1943- beginning 1944, as the III Reich was collapsing under the “Round the Clock Bombing”, to try and find a radical and ultimate way to oppose the large bombers formations which destroyed Germany's towns and industries.

2.   2- The Tactics and the first Sturm Staffeln

During a 1943 meeting between the General der Jagdflieger Adolf Galland and the Major Hans-Günther von Kornatsky was developped a new tactics idea (after Kornatsky's own suggestion):

A standard fighter attacking a Viermots (4-engine allied bombers) box from the back had to support the defensive shots of nearly 40 machine guns and had no chance to achieve its mission.

But a compact Gruppe of specially trained and equipped fighters could give a better possibility to some to escape from this hell fire and get closer enough (that means 100 to 30 meters) to shoot down at least one or better several bombers...

The more accurate fighter for this kind of mission appeared to be the FW 190, but modifications to strengthen armor and improve weaponry had to be made.

The possibility of ramming into the targets in case of weapons ineffectiveness was mentioned.

Galland was enthusiastic with this idea and creation of an experimental Gruppe was launched.

In October 1943, the first volunteers of the Sturm Staffel 1 arrived at Achmer, near Osnabrück. 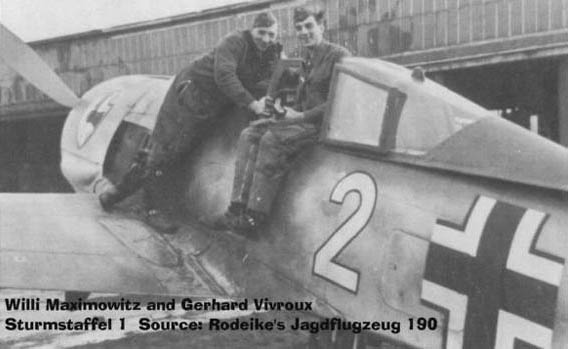 Clearly visible on this photo are the "Scheuklappen" (the extra armor 30mm plexi canopy plates) and the SturmStaffel 1 insignia on the engine cowling. This plane (FW 190A-6 "White 2", Sturmstaffel 1, Dortmund, 1944), is the object of the HM 1/48 model HA7414 (http://www.hobbymastercollector.com/HA7414.html).

In August 1944, JG 300 and JG 4 were operational too, reaching the total of three Sturmgruppen which consisted of each 3 Staffeln, then 4 Staffeln mid August 44. 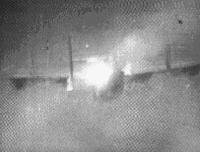 The pilots of these special Staffeln were volunteers and signed a contract (they were widely encouraged to draw up their will too...) engaging themselves to shoot down at least one “Viermot” at each of their missions, by standard FW190's weapons, and if this way failed, to crash into the target (generally by wrecking / shredding the bomber's tail) and bail out.

If not, the empty-handed pilots could be judged in martial courts and put to death, as, in the last days of the IIIrd Reich, the SS officering and politic police (Gestapo) were powerful. (Such was the psychologic pressure on these men that an intact plane landing short of ammunitions without a "kill"  automatically should cause the concerned pilot to be convinced of cowardice or betrayal and immediately arrested).

This case never really occurred to unlucky German Sturm pilots (the lack of veteran pilots was too evident), but defeatist attitudes were elsewhere often eradicated by this summary justice. 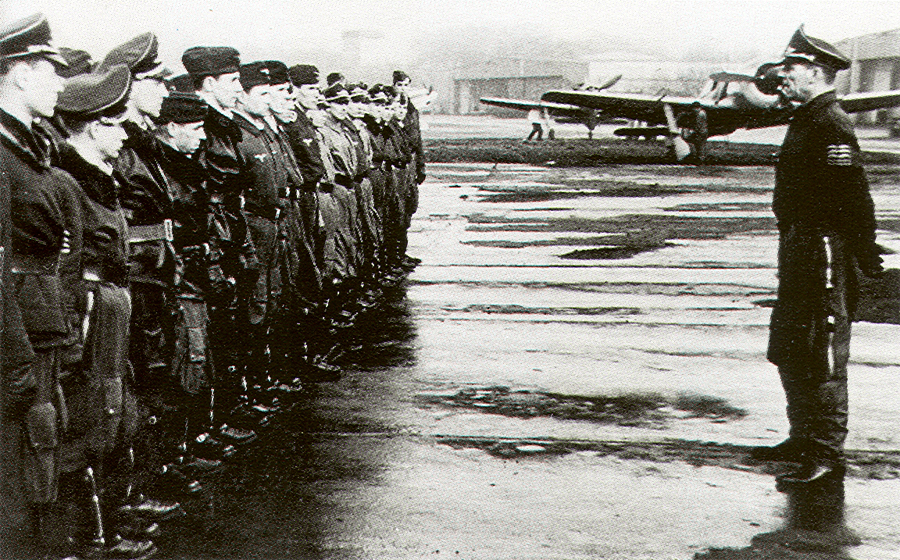 As a mark of their commitment, many Sturmgruppen pilots wore a special "white of the enemy's eyes" insignia on their flying jackets.

These pilots, though sometimes inaccurately compared to “German Kamikazes”, had to survive to their missions to fight again. This was only a One Way ticket for the Japanese Suicide pilots.

In the last days of the war, there were cases of real “suicide” German pilots, who crashed deliberately with explosive loads onto Soviet AFVs and troops convoys or onto temporary bridges  in desperate attempts to try and slow down Russian advances in Germany, and other Viermots ramming cases as the Sonder Kommando Elbe with intentionnaly underarmed Me 109 Gs, but these are other stories.

The "R" stands for "Rüstsatz" (equipment variant applied directly in the operational units - Another suffix could be "U" for "Umrüst Bausätze", meaning, at the opposite: "factory range applied variants").

There were several FW190 A8 Rustsätze including outer 30mm AT cannons, oblickely fired rockets, or other experimental weapons. That means that, following the equipment variant applied to the same plane, the "R" number could change. (There's a doubt on the "R" version of this model: 30mm wing mounted Mk108 guns mean the R2 modif, though armour reinforcement stands for the R7/R8 versions.)

The “Sturmbock” FW190 A8/R2 (R8?) version differed slightly from the standard A8  characteristics by several points: A8 - A8/R2 comparisons. Note that the A8 version ("blue 13" at the left) shown here belonged to the Stab JG 300, and was flown by ace Oberst Walter Dahl, nicknamed "RammDahl". This A8 was reconverted from a Sturmbock and wears Dahl's personal insignia, and rusty screw marks of the fuselage old armor plates fixations.

The 4 first points gave a weight increase of approximatively 200 kg, which caused a loss of the FW 190 speed and manoeuvrability, thus an increase of vulnerability to allied fighters.

Most of the time, the twin MG 131 13mm cowling machine guns were removed for a weight gain (and ineffectiveness for this kind of mission) and muzzle apertures masked or flat fairing put in place of the molded one.

The Rammjägern, as sometimes named, had to be protected by lighter Me 109 G Wings escort fighters who engaged the Spitfires, P38, P47 or P51 and let the Sturmböcke FW 190s deal with the Viermots.

This last point was not a piece of cake for the FWs pilots who have to take the bomber's gunners multiple shots (7.62mm to 12.7mm caliber - .30 to .50 in.) before closing their targets for a nearly 100% "Abschuss" (shot down) probability.

The creation of Sturmstaffeln within every Gruppe did not bring resolution to the problem of allied numerical superiority and allied Fighter Wings overwhelming omnipresence. At some occasions, Sturmstaffeln surprised "Grooses" without escort and made scores but these were rare opportunities.

The results were not convincing as the Sturm Staffeln supported proportionnally at least as much losses as Allied forces and, in late 44, the remnants of these formations were reaffected to the defense of the Reich (Reichsverteidigung), some of the Sturmböcke being reconverted to their original configuration. 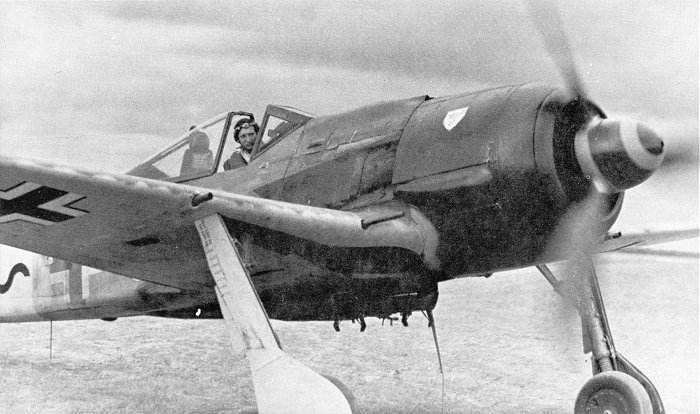 Upper photo: another German ace, Uffz. Willi Maximovitz (-yet on another upper pic !- coming from SturmStaffel 1), 11 (Sturm) /JG3 Staffel, who flew as Kaczmarek (wingman) of GruppenKommandeur Moritz. Note that his FW190 has been cleared of her armor plates but retains the mid wing MK108 30mm guns and the 30mm frontal canopy plexi shield and that she is wearing the JG3 insignia on the engine cowling.

Alas, the black wave sign of IV/JG3 is reversed and the inner colour of the fuselage Balkenkreuz might have been grey, not black.!!. 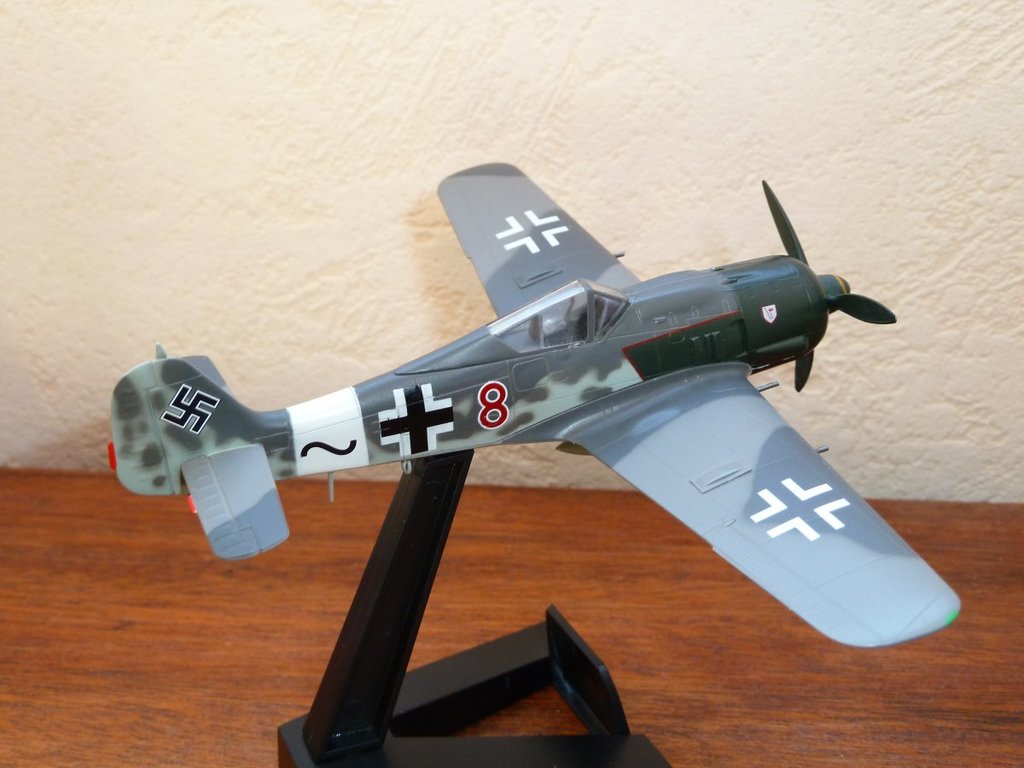 I hope that this discussion was of some interest for you and advise you to consult/buy Erik Moombeeck's book "Storming the bombers", tomes 1 and 2, dedicated to Sturm Staffel 1/ JG4's story. 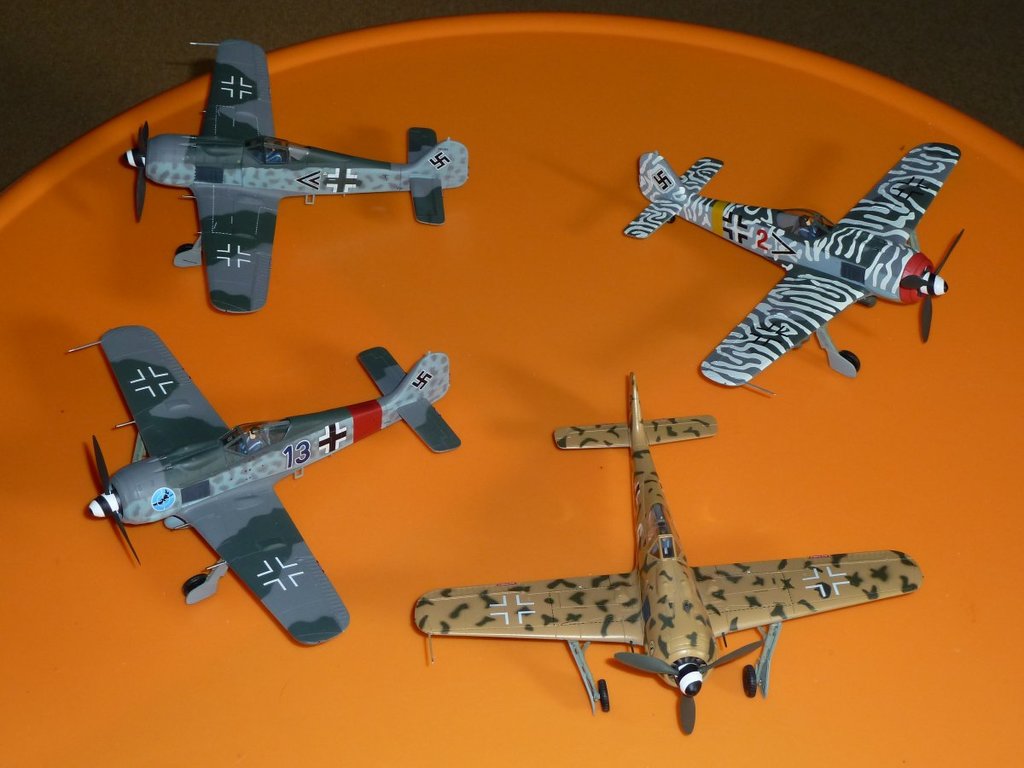 Ciao, all and take care !

Nice model and thanks for the background information. It is very interesting and a story I had not been aware of.

Many thanks for your reaction !

Nicely put together!  Its nice to know more about the models we buy.  Thanks for sharing with us Jeff!