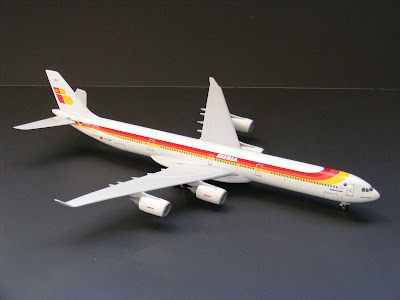 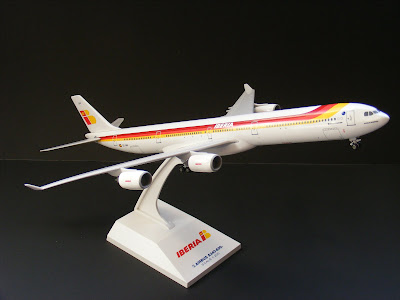 Review:
Mould - This mould has some big flaws. Nose is way off. It's way to pointy, and the area around the cockpit window is completely wrong. The nose, and main landing gear look like they were just sticks with tires glued on. The area where the wings meat the fuselage are moulded incorrectly, and the engines aren't the right shape. The list goes on. However, there were some things they got right. The dimensions are all correct, and the tail area around the vertical stabilizers is actually done quite well. If you look at a Airbus A340-600 closely you'll see that there are actually bulges around the horizontal stabilizers, which Risesoon/SkyMarks has captured very well.
Overall I give the mould a 6.0 out of 10.
Livery - The livery is off in a lot of places. The lines are slightly too small. The colors are all off, the orange being the worst. The placement of the livery is mostly correct, except for the lines being slightly thin. Where the lines narrow towards the tail is also very overstated, and they get way to thin at that point in the livery.
Overall I give the livery a 5.1 out of 10.
Details - As a lot of Risesoon/SkyMarks models are. This model is lacking a lot of details. The cockpit windows are incorrect, there are no antennas at all. No APU is marked, and there are pitot tubes, static ports, and lights not marked. The wings and horizontal stabilizers have no detail at all. The engines have no detailing at all. As mentioned above the landing gear are completely wrong, and therefor have no details at all. There are even logos on the real aircraft that have been there since it was delivered that are not present on the model. The lack of detail on this model is overwhelmingly it's downfall.
Overall I give the details a 4.1 out of 10.
Value for money - I'm no longer giving this category a points value because I don't want the availability of the model affect the overall score, but I am still going to cover it in the reviews. This model can be picked up for right over $30.00, which for a model of this size is pretty cheap. Similar sized metal models will set you back $90.00 or more. Everyone should keep in mind too that Herpa has announced that they will soon be releasing a 1:200 Iberia A340-600, and I can guarantee it will be better. It will probably be around $50.00-$65.00, and I would recommend waiting for it. You'll be happier with it.
Overview - The models mould is incorrect, the livery isn't correct, and the detailing is not good at all. If there is anything nice to say it's that this is the cheapest option for a A340-600 in 1:200, but at the same time if it were any more expensive no one would buy it. It honestly ins't worth $30.00. My suggestions are to wait for the Herpa version. it will be much better detailed, the mould is better, and the livery will be more accurate, and even though it will probably be double the price it will be worth it.
Overall the model receives a 5.1 out of 10
Photos: 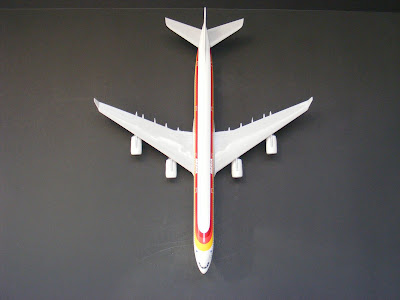 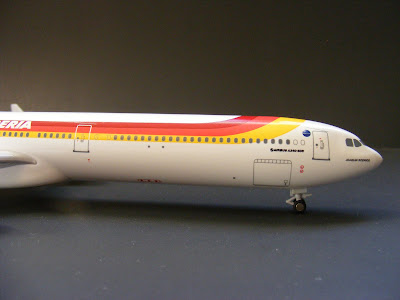 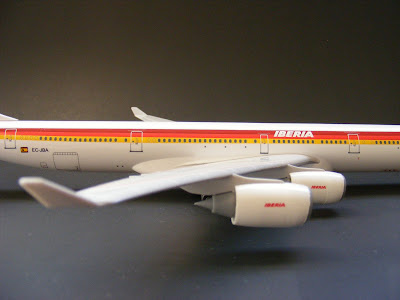 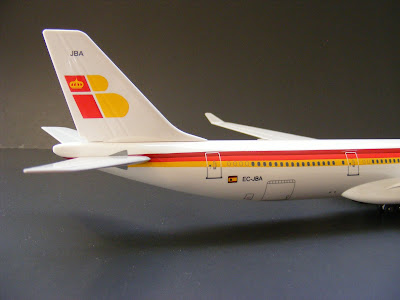 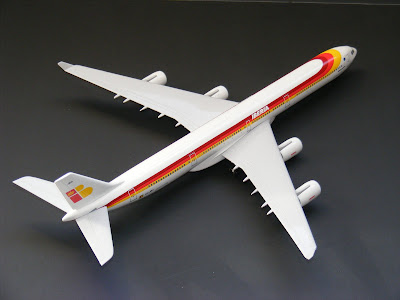 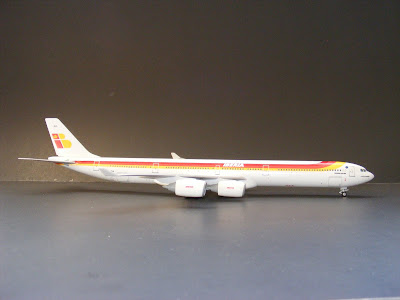 Thanks for reading!
Bryce Rea